SADA’s mission is to help and to save the lives of underprivileged children and infants in Sindh and Baluchistan by providing hospitals with life serving medical equipments’ and medicines supplies and staff.

Health care is considered universal human rights. But unfortunately this is not happening in Pakistan. The public health system of Pakistan has many deficiencies due to lack of financial resources, human resources and lack of proper services.

Message from the Chairperson

It is for me a pleasure to forward this newsletter of December 2019 to all concerned. The news letter is a part of information dissemination to all our partners and solicitors keeping them informed about our projects in NICH, which has been designed for the welfare of the deserving children.

SADA Welfare Foundation, since its inception in 1995, has been supporting the deserving children who need medical attention and care for their survival of life.

It is to be mentioned here that we are deeply committed to serving helpless children in the most efficient and affectionate manner possible.

It is unfortunate that in 2019 we faced several misfortune in Pakistan like Dengue fevers, Malaria, water borne diseases, (no availability of clean water to drink) dog bites for which not only the men and women suffered but the children have badly suffered. According to a senior health official of National Institute of Health (NIH) more than 44,000 people have been infected by dengue out break and 66 (sixty six) deaths have been occurred so far. Dog bite is another serious problem and rabies is highly dangerous. Due to dog bites several causalities took place. The problem of dog bite is not only in Sindh but in Punjab also it is continuing. Although Government of Sindh and Punjab are trying hard to fight these hazards, but the problem is yet to be end. Proper, timely and affordable treatment cost is required for treating the patients.

We assure our trustees, donors and partners and the communities that our spirits of helping the victimized children will continue by our organization. Quality of services and patients’ security to be taken care of. For the coming year 2020 we hope your kind cooperation and donation to our NGO so that we can work more effectively, for the welfare of the children. May Allah bless us all in the year 2020. HAPPY NEW YEAR.

SADA Welfare Foundation is a non- government organization based at National Institute of Child Health (NICH) from where it extends help to the needy children. The treatment of children and our ongoing projects are undertaken at the various departments of NICH, Jinnah Post Graduate Medical Center (JPMC), and National Institute of Cardio Vascular Diseases (NICVD) Karachi.

The history of the existence of SADA Welfare Foundation (SWF) is a story of profound passion of serving humanity of the founding members  Ms. Fawzia Siddiqui and Mrs. Tahira Jawaid who were active individual social workers at the beginning.

SADA Welfare Foundation is focusing on child’s health, providing medicines for TB, renal, Nephro, Cancer, Neonatal Unit, Pediatric Cardiac surgeries free of cost. It was established in the year 1995 and has been serving the cause since 24 (Twenty four) years.

SWF is administered by a dedicated management team, which invests its time, efforts and resources to serve its passion through the foundation. It is supported by list of corporate entities and performs celebrities who support the organization as trustees and patrons.

Apart from the above Trustees we have number of Corporate sectors, like Bankers, Industrialists, national and multinational companies, embassies, foreign missions,   in Pakistan whose help to Sada Welfare  Foundation in running these projects are invaluable over the years.

The services of SADA Welfare Foundation are based over the belief that children are the future of a country and health care system of children is an essential component.  With this belief SWF  laid the basis of its services, which aimed to provide quality services of health care to needy children without any discrimination and inequality.

So far our foundation was able to treat more than 36,000 patients by providing different Blood Products free of cost. After the up gradation of Blood Bank, larger storage capacity, new equipments and advance technology, SADA has been able to provide services to a far greater number of needy children as compared to previous years.

Provides life saving drugs, disposable items, disinfectants, stationary to the Neonatal Unit. In addition, we also take care of the maintenance of equipments.  Total cost for the current year is approx Rs.5.2  Millions.

This is to be mentioned here  that  SADA Welfare  supported NICVD by helping the Pediatric Cardiac Surgeries under the supervision of  Prof. Dr. Najma Patel Advisor and Consultant NICVD, 380 children were provided free of cost surgeries. Cost varies between Rs. 50,000 to 200,000- depending upon the nature of procedure adopted.

The SADA Welfare Foundation has added to its contribution for development of health care system of Pakistan by collaborating with Civil Hospital, Karachi for treatment and surgeries of Artificial limbs. The facility helps the limbless people to get services of artificial limb treatment free of cost.

Other than the support of the limbless patient’s at Civil Hospital Karachi, SADA Welfare Foundation also offers facility of free cost of dispensaries to needy patients.

Sada Welfare Foundation established two Dispensaries in Deprived area of Lahore. Hundred of patients visit these units where they are provided free medical checkup and medicines.

Patients are gathering for medical checkup and medications

Break up of treatment is as follows:

Running Expense of our Project:

A blood bank must have an adequate supply of blood on hand to meet the demand when patients need it. But this is complicated by the fact that the number of units of bloods that may be used for a particular situation can sometimes be unpredictable, complicated surgical procedures natural and man-made disasters, accidents, increasing number of Thalassemia and oncology patients make it impossible to predict how much blood may be needed at any given time, so having a large supply of viable blood is important. To overcome this difficulty we organize blood camps in different organizations, institutions, universities and public places where people will gladly donate bloods.

To overcome this difficulty we organize blood camp in different organizations, university, institutions and other places where people would gladly donate bloods.

It may be mentioned that Child Aid Foundation & Child Life Foundation two other NGOs working in NICH. The patients of these NGO’s are also benefitted by the blood bank run by Sada Welfare Foundation.

Donate Blood to save a life!

CASE Story of a patient of TB 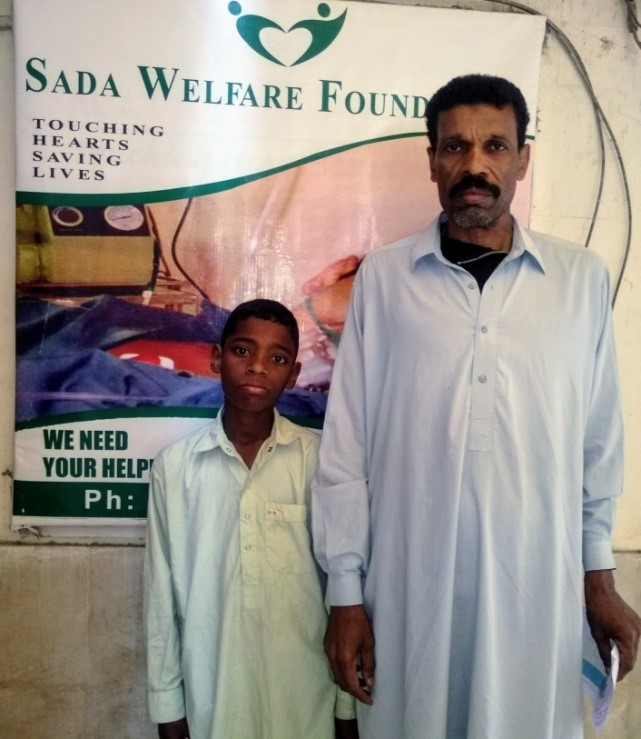 Allah Bux, aged 43 years lives in Baldia Town, Molanzi camp No. 5 1/2, Karachi.  His elder son Abdul Matin, 13 years was a TB Patient. He was attacked by TB about 8 months ago. Initially the boy was admitted in the child ward of NICH, where Ultrasound and TB test were conducted. Finally the doctor advised his son to take the treatment of TB as TB was identified to his boy. This was MAY 2019 when,  TB treatment started. My elder son  Matin was reading in Class 4, but after his illness he could not go to school.

Allah Bux works in a factory in SITE area, ZIA Chowrangi ,  in Karachi. He has two daughters, aged 12 (Twelve) and 03(three) years. He mentioned, “It is hard for me to bear the cost of treatment and education for the children with my small earnings from the Factory”. He continued, “Coming from Baldia Town to NICH, for the TB medicine was costly for my son”.  He continued adding,”  It is not possible for my son to come alone to NICH”. In May 2019, Allah Bux, said, “My boy was very sick and we had to hire often ambulance to get him to NICH. But after few months when my boy’s condition was improved we used public bus, but again, we had to pay Rs. 200 to 250 in each visit”.

Allah Bux cheerfully added that, “From this month treatment of TB for my son is finished and doctor has checked my son finally and said my son is cleared from TB now.”  My son does not need any more medicine to take. Allah Bux said, “I am happy that my son will be able to go to Madrassa, which is near from our home now, and that we do not need any more treatment for my boy”.

To provide life-saving blood, medicines, to the needy patients and life saving equipments are the pressing need of our hospital.  These projects highly depend on donations from the public in order to fulfill one of basic health of this area. We seek your generous donation either  in cash or kind .